It has been fifteen years since September 11, 2001, yet the terrorist attacks continue to take lives daily. According to the World Trade Center Health Program, as of July 2016, at least 1,140 people have died due to 9/11-related illnesses. However, this number is based on data from unsolicited reports. The Health Program does not collect mortality data or analyze causes of death. Further, out of the estimated 500,000 people exposed to 9/11 toxins on, and in the months after 9/11, only about 65,000, or less than 20%, have enrolled in the Health Program. Of the number of enrolled, only 10,000 are survivors; meaning those who lived, worked, attended school, or visited the area which is within a 1.5-mile radius of Ground Zero between 9/11 and July 31, 2002. Therefore, with nearly 400,000 unaccounted for, the actual death toll of 9/11 exposure may be staggeringly higher.

As the death toll continues to rise, so does the number of people suffering from the growing list of 9/11-related conditions approved by the World Trade Center Health Program. According to Dr. David Prezant, co-director for the FDNY World Trade Center Medical Monitoring Program, “The diseases stemming from the World Trade Center attacks include almost all lung diseases almost all cancers- such as issues of the upper airways, gastroesophageal acid reflux disease, post-traumatic stress, anxiety, panic and adjustment disorders.” Sadly, the attacks have waged a two front war on the bodies and minds of the nearly 500,000 people who were exposed to 9/11 toxins.

Exposure to 9/11 toxins has caused a particularly higher rate of cancer: referring to a 2011 research study published in the British Lancet Medical Journal, Dr. Prezant noted to Newsweek that FDNY members who worked at Ground Zero are 19% to 32% more likely to develop cancer. In July 2011, Dr. John Howard, Administrator of the World Trade Center Health Program, initially declined to include cancer as a 9/11 related condition. However, Dr. Howard’s mind was changed due, in part, to the findings of the FDNY study. As a result, on October 12, 2012, the Health Program added 50 types of cancer to the list of covered conditions. Since then, additional cancers have been linked to 9/11, and included on the list of covered conditions. It has been recently reported that 9/11 cancer diagnoses have tripled in less than 2 1/2 years among Health Program patients, with a total of over 6,000.

Mesothelioma has a minimum latency period of 11 years, and may take far longer to reveal itself. According to Dr. Craig Stevens, mesothelioma specialist at the Moffitt Cancer Center in Tampa “It’s difficult to know the absolute risk for each person, but I would expect a rash of mesothelioma and lung cancer cases to begin 20 years after 9/11 and to peak about 40 years after 9/11. It is a looming health problem that is underestimated right now by the general public.” Inhalation of asbestos fibers causes mesothelioma; The Natural Resources Defense Council estimates that among the 300 to 400 tons of asbestos fibers were used to construct the 16-acre World Trade Center site. The asbestos level at Ground Zero is estimated to have been 112,000 times the legal limit for a building.

Pitta Giblin & Baione LLP encourages responders and survivors who lived, worked, attended school, etc. within the below indicated exposure zone between 9/11 and July 31, 2002 to apply to the World Trade Center Health Program. Responders are defined as:

FDNY Responders are defined as:

Survivors are defined as:

Members of the Health Program not only help themselves by treating with physicians who are experienced in 9/11 toxins exposure, but also help the population as a whole by providing data for scientists to analyze. This data has been proven invaluable time and time again as the Health Program continues to recognize conditions for treatment. As a pro bono service to the community, PGB offers assistance through the application process. 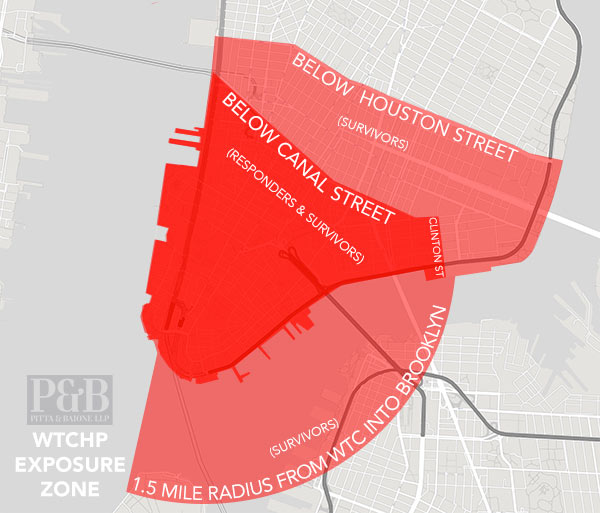 Additionally, individuals who were below Canal Street, as indicated by the map below, between 9/11 and May 30, 2002 may also be eligible for compensation through the 9/11 Victim Compensation Fund (VCF). 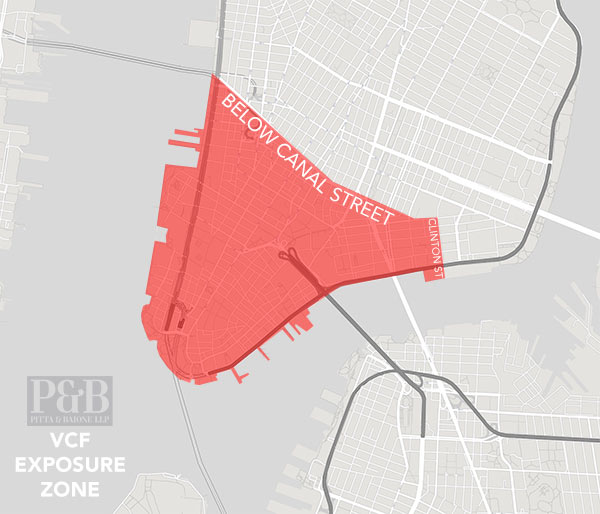 In addition to the 300 to 400 tons of asbestos introduced into the environment on 9/11, there was a host of other carcinogenic 9/11 toxins. Dr. Michael Crane, director of the World Trade Center Health Program’s Clinical Center of Excellence at Mt. Sinai, commented on the issue “We will never know the composition of that cloud, because the wind carried it away, but people were breathing and eating it. What we do know is that it had all kinds of god-awful things in it. Burning jet fuel. Plastics, metal, fiberglass, asbestos. It was thick, terrible stuff. A witch’s brew.”

Specifically, there were as many as 50,000 personal computers, each of which contained a variety of toxins including four pounds of lead and troubling amounts of mercury, and 300 mainframe computers powered by hundreds of miles of wires containing polyvinyl chloride (PVC) and copper. There were 23,000 mercury containing fluorescent light bulbs and 12,000 miles of electric cables in the Twin Towers alone. The 16-acre site contained 10,000,000 tons of building material and contents, which burned at temperatures close to 2,000 degrees Fahrenheit along with 91,000 liters of jet fuel and 130,000 gallons of transformer oil.

Yet, despite the incredible amount of 9/11 toxins that were spewed into the air, just days later, Christine Todd Whitman, former Administrator of the Environmental Protection Agency, announced “I am glad to reassure the people of New York and Washington, DC that their air is safe to breathe.” Unfortunately, we now know that Whitman’s statement was woefully inaccurate.