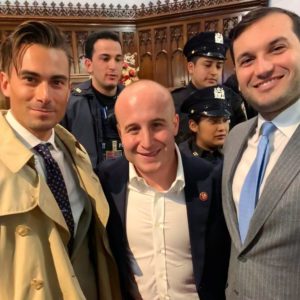 House Representative Max Rose from New York’s 11th Congressional District is hosting a Town Hall on the 9/11 Victim Compensation Fund, which will feature speakers from both the Fund and World Trade Center Health Program:

The freshman Congressman has been a staunch advocate of the Never Forget the Heroes: 9/11 Victim Compensation Fund Act since he assumed office in January as the representative for all of Staten Island and parts of Southern Brooklyn. Hon. Rose led a bipartisan effort to garner support from fellow Members of Congress who were elected after the passage of the James Zadroga 9/11 Health and Compensation Reauthorization of 2015. In announcing his support and leadership on the Never Forget the Heroes Act, Hon. Rose said

9/11 wasn’t just an attack on New York—it was an attack on the United States of America, so we have to do more than never forget. We need to do right by the heroes who put their lives on the line and are now living with the consequences. Kicking the can down the road with short-term extensions is no way to provide certainty and stability for these families. We need a permanent solution, and I’m honored to help make that happen.

Since then, over 320 House Representatives have agreed to sponsor the Never Forget the Heroes Act.

As discussed constantly by our firm since February, the Never Forget the Heroes Act is the 9/11 community’s only hope to rescue the 9/11 Victim Compensation Fund (9/11 VCF) from its current funding crisis. The 9/11 VCF announced devastating 50 to 70% cuts on February 1, 2019, in response to insufficient funding caused by rapidly rising 9/11 cancer and death rates. Due to 9/11 VCF calculations, the “true cut” in some cases is much higher. Just recently, a client suffering from terminal cancer received a staggering 95% cut in compensation.

The Never Forget the Heroes Act would roll back these cuts, payback victims who already received reduced awards, and permanently fund the 9/11 VCF to ensure that every 9/11 victim – everyone who ran headlong into Lower Manhattan on and after 9/11, everyone who was told the air was safe to breathe, every family of every fallen 9/11 hero and victim – is compensated.

Hon. Rose recently attended the House Judiciary Subcommittee hearing on June 11, 2019, to show support for the Never Forget the Heroes Act, and to the 9/11 responders who shared their heart-wrenching stories. The hearing grabbed headlines after Jon Stewart lambasted all House Representatives who were not in attendance. Hon. Rose was under no official obligation to be there, yet he went anyway. It is safe to say that Hon. Rose was not a target of Jon Stewart’s ire.

Before assuming elected office, Hon. Rose worked for the Kings County District Attorney’s Office, and prior to that served in the U.S. Army. Hon. Rose earned a Ranger tab, Bronze Star, and Purple Heart for his service in Afghanistan.

We applaud and thank Hon. Rose for his relentless efforts on behalf of the 9/11 community. We encourage all clients who can attend this Town Hall to do so as a sign of support and gratitude for all he has done to help pass the Never Forget the Heroes Act. The job is not done until the 9/11 VCF is fully funded. Until then, we have a true hometown hero on our side in the seemingly endless fight to gain justice on behalf of the 9/11 community.

Click here to find out if your Member of Congress supports the Never Forget the Heroes Act. If they do, thank them. If they don’t, urge them to.