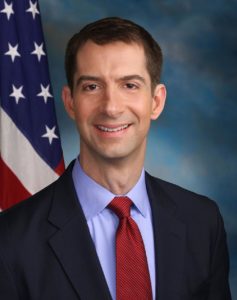 It’s official: Republican Senator from Arkansas, Tom Cotton, has agreed to sponsor The Never Forget the Heroes: Permanent Authorization of the 9/11 Victim Compensation Fund Act (S.546). The “Never Forget the Heroes Act,” if passed, would extend the 9/11 Victim Compensation Fund (9/11 VCF) through 2090, rollback the recently announced 50-70% cuts in compensation to 9/11 victims, and allow the 9/11 VCF to return to paying 9/11 victims in full.

Senator Cotton is junior to Arkansas Senator John Boozman who has not yet agreed to sponsor the Never Forget the Heroes Act. Senator Cotton attended Harvard for both undergraduate studies and law school. After working at the prestigious firm Gibson, Dunn & Crutcher for three years after law school, Senator Cotton enlisted in the U.S. Army. During his military career, Senator Cotton rose to the rank of First Lieutenant, served in Afghanistan and Iraq, and received a Bronze Star for valor. Senator Cotton was elected to U.S. Senate at only 37 years-old.

The 9/11 attacks occurred while Senator Cotton was in his third year at Harvard Law School. According to Senator Cotton, it was on that morning that he vowed to serve as an infantryman in the U.S. Army. Senator Cotton later joined a generation of soldiers who enlisted in the military as a response to the attacks on 9/11.