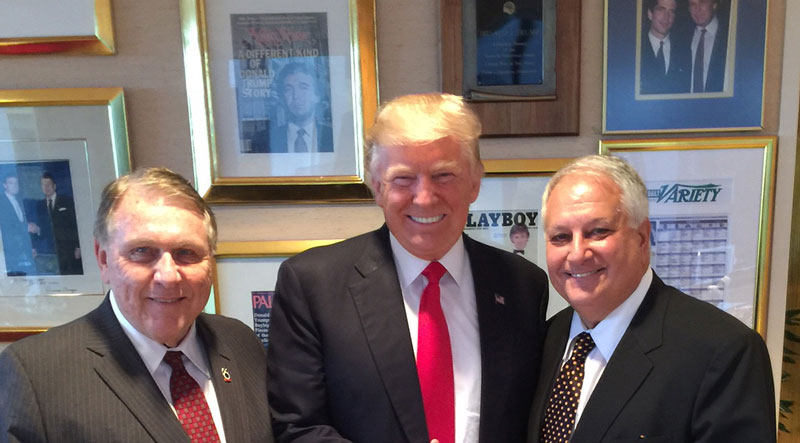 Pitta & Baione LLP managing partner Vincent F. Pitta has kicked off 2017 by having several meetings with President-Elect Donald Trump to discuss infrastructure, construction initiatives, jobs, healthcare and environmental issues, and union members’ rights. Politico compared Mr. Pitta’s meeting with President-Elect Trump to that of Mitt Romney and Al Gore. Mr. Pitta has negotiated labor contracts on behalf of union clients with companies owned by President-Elect Trump since 1979 – most recently the Trump Hotel in Las Vegas and a neutrality card check agreement with the Trump International Hotel in Washington, D.C.

Mr. Pitta is deeply concerned with health issues faced by Americans — first responders and others — who were exposed to 9/11 toxins, or WTC dust. Recent studies and reports show that the casualties from the 9/11 terror attacks continue to grow, as the long-term effects caused by exposure to airborne toxins at the attack sites begin to manifest and cause serious illness such as cancer, lung disease and other aero-digestive disorders.

It has also been reported that about 1,100 deaths are attributable to exposure to airborne toxins resulting from the 9/11 attacks, and that the cancer rate for persons exposed to these toxins has tripled in the past two and half years. Scientists have predicted that health effects arising from exposure to airborne toxins will cause more deaths than the terrorist attacks themselves.

While the above mentioned statistics are devastating, perhaps more shocking is that the numbers are based on less than 20% of the exposed population: the National Institute for Occupational Safety and Health (NIOSH) estimates that over 500,000 people were exposed to toxins on and after 9/11, yet less than 80,000 have enrolled in the World Trade Center Health Program.

In response to the ongoing health concerns of 9/11 toxins exposure, Congress passed The James Zadroga 9/11 Health and Compensation Act, and its 2015 reauthorization. The Act and reauthorization provided for over $12 billion in benefits, the World Trade Center Health Program, and the 9/11 Victim Compensation Fund.

Pitta & Baione LLP assists individuals applying to the World Trade Center Health Program and represents their corresponding claims for compensation. Anyone who was exposed to 9/11 toxins, or WTC dust, on, or in the months following 9/11, may be eligible for free healthcare and compensation.

The following is the list of conditions currently eligible for free healthcare and compensation. The list is subject to change as scientific studies reveal new conditions caused by exposure to 9/11 toxins. For example, COPD (chronic obstructive pulmonary disorder) was recently added to the list.