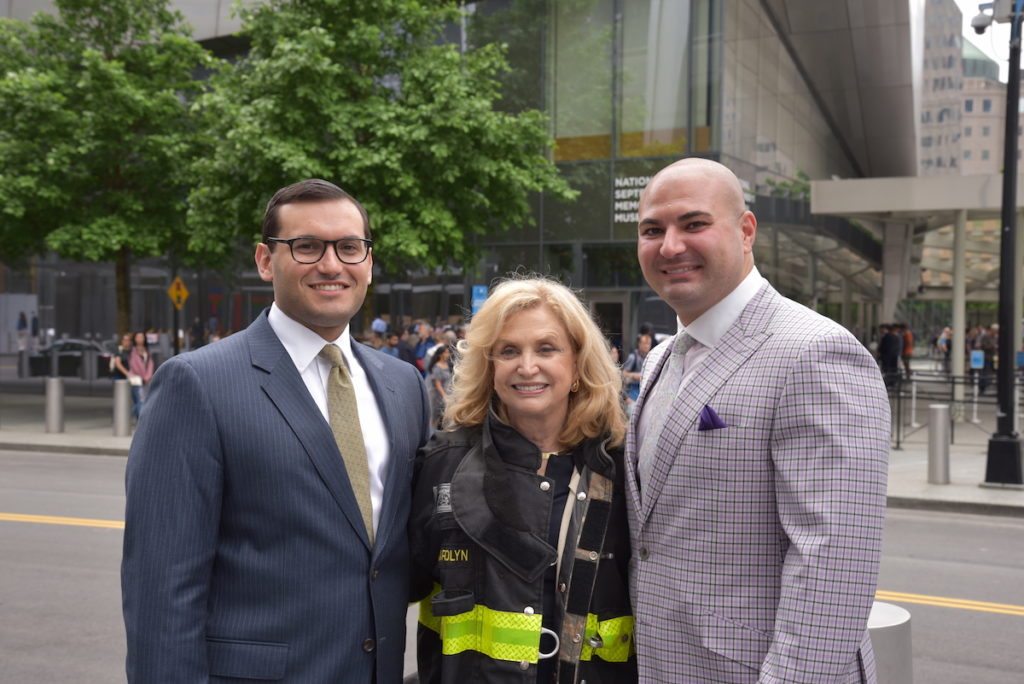 Every year, Vogue Editor Anna Wintour hosts the Costume Institute Gala at the Metropolitan Museum of Art, colloquially referred to as the “Met Gala.” The Gala is famous for serving as the fashion world’s night out, as models, designers, creatives, and journalists are joined by entertainers, celebrities, power players, and politicians. The party is highlighted by a trend of attendees’ penchant for making spectacles out of themselves.

This year, House Representative Carolyn Maloney chose to draw attention to herself for a cause: providing compensation to 9/11 responders and survivors. Rep. Maloney wore an FDNY coat custom made for her by a 9/11 responder advocate. She has worn the FDNY coat since February 25, 2019, when she introduced the “Never Forget the Heroes: Permanent Authorization of the September 11th Victim Compensation Fund Act.” We applaud Rep. Maloney for using her platform, and taking advantage of the party’s publicity, to advocate on behalf of 9/11 responders and survivors who are fighting for the compensation they deserve.

Representative Carolyn Maloney (D-NY) has been a champion of 9/11 health and compensation benefits since the aftermath of the attacks. Rep. Maloney understood early the dangers associated with exposure to toxic 9/11 dust, and made it her priority to provide benefits for those who were exposed.

In 2005, she began the legislative journey of providing health and compensation to 9/11 victims by introducing the “Remember 9/11 Health Act.” Unfortunately, other legislators were not convinced that exposure to an unprecedented amount of toxic carcinogens that burned for 99 days would potentially cause health issues.

While the Zadroga Act was a major victory for the 9/11 community, it included one wrinkle: a five-year expiration date for both programs. As the five year deadline approached, victims of 9/11 toxins exposure realized that it would not be nearly enough time. Legislators and 9/11 health advocacy groups came to the same conclusion and initiated another lobbying and legislative battle to extend the 9/11 VCF and WTC Health Program beyond 2015.

After another hard fought battle led in part by Rep. Maloney, which involved yet another Jon Stewart shame campaign, the reauthorization of the Zadroga Act was passed in the 2015 omnibus appropriations bill. The reauthorized Zadroga Act extended the 9/11 VCF through December 18, 2020 and extended the World Trade Center Health Program through 2090.

After the reauthorized Zadroga Act was passed, many of our clients asked us why Congress didn’t extend both programs through 2090. We have now found out that both programs should have been extended through 2090. As it stands, the 9/11 VCF is due to expire in 2020, and recently announced 50 to 70% cuts in compensation for 9/11 victims are here to stay. The compensation cuts were introduced in response to rapidly rising 9/11 cancer rates and deaths caused by 9/11 related illnesses. The 9/11 cancer rate is now above 10,000 after a 3800% incidence increase in less than five years.

So, on February 25, 2019, Rep. Carolyn Maloney, along with a coalition of bipartisan legislators including historical 9/11 benefits champions Rep. Jerrold Nadler (D-NY), Rep. Peter King (R-NY), Senators Chuck Schumer (D-NY), Kirsten Gillibrand (D-NY), and newcomer Cory Gardner (R-CO), introduced the “Never Forget the Heroes Act: Permanent Authorization of the September 11th Victim Compensation Fund” on Capitol Hill. During the press conference, Rep. Maloney wore a custom FDNY coat with her name on the back which was given to her by a grateful 9/11 responder. In referencing her attire, Rep. Maloney said she would not take off the coat until the bill is passed.

After the press conference, partners Vito R. Pitta, Christopher J. Baione, and Matthew J. Baione, spoke with Rep. Maloney to express gratitude for her steadfast support of the 9/11 community and our clients. Rep. Maloney made a vow of victory on behalf of the 9/11 community. Once again, she promised to keep the coat on until the bill gets passed. Since that day, Rep. Maloney has appeared publicly and on television while wearing the famous coat and advocating for the Never Forget the Heroes Act.

In an interview with Roll Call following the event, Rep. Maloney commented “Wearing this coat around Congress and to public events is a visual reminder of the promise we made to our 9/11 heroes – responders and survivors. It is certainly a conversation starter and helped me spread awareness about the need to pass the 9/11 James Zadroga Health and Compensation Reauthorization Act. I’m hopeful it will do the same for the Never Forget the Heroes Act and be a reminder to my colleagues in the House about our duty to these Heroes.” Since that day the House support of the Never Forget the Heroes Act increased over 300%…

Once again, at this year’s Met Gala, an annual fashion event attended by some of the biggest names in the world, Rep. Maloney donned her custom FDNY coat. In doing so, she shined a giant spotlight on the Never Forget the Heroes Act. Among a crowd of outlandish outfits, Rep. Maloney chose to make her fashion statement one in support of 9/11 victims and the Never Forget the Heroes Act.

In discussing her Met Gala ensemble, Rep. Maloney told the New York Post “I’m fashion with a purpose. I’m not Versace, I’m not Gucci, I’m FDNY. The fire department is the best designer in the world, worn by more people than any other designer in the city of New York.”

Click here to find out if your Congressional representatives support the Never Forget the Heroes Act. If they do, thank them. If they don’t, urge them to.